One of the most important decisions you need to make is whether to put your retirement money into a Roth or a Traditional 401k.  The decision is a personal one depending on your view on taxes.  On the traditional 401k, you get a tax break now, but pay regular in tax rates when you withdrawal.   On the Roth 401k, you don’t get a tax break now, but pay no tax when you withdrawal.   Take a look at the comparison table below. 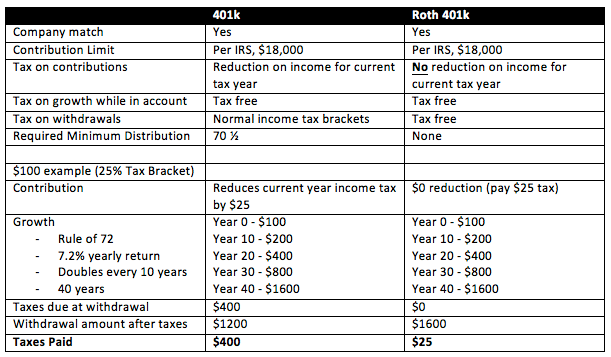 The Roth has another advantage, no Required Minimum Distributions (RMD) in your lifetime.  On the traditional 401k, you have to start taking RMD’s at 70 1/2.  The government wants that tax revenue.  In english, this means under the Roth, I never have to take any distributions in my lifetime.  I can pass all of the money in the Roth to my kids tax free to them and they don’t pay taxes when they pull from my Roth.  It is a huge consideration if you want to keep wealth in your family and not give it to the government.  I know I do.

What is the ‘Rule Of 72’
The rule of 72 is a shortcut to estimate the number of years required to double your money at a given annual rate of return. The rule states that you divide the rate, expressed as a percentage, into 72:

This entry was posted in Investing. Bookmark the permalink.